Glass or fiberglass shower doors are attractive and easy to use. But every time you use your shower is a chance for soap scum, grime and body oils to build up and turn your shower door’s surface into a streaked, smeared, cloudy mess.

To make matters worse, stubborn soap scum grabs on to your shower door and doesn’t let go, leaving you holding onto the door with one hand and furiously scrubbing with the other. Put down that scrubber!

Wet & Forget Shower blasts through soap scum, body oils, grime, and mold and mildew stains with no scrubbing needed. Just one simple weekly application will keep your shower doors–and the rest of your shower–sparkling-clean.

Taking a shower would be pretty useless without any soap. Unfortunately, any soap or body wash you use will lead to the gradual buildup of stubborn soap scum.

Soap scum leaves a whitish film behind on your shower doors, and will leave them looking cloudy and streaked. Soap scum is notoriously hard to get rid of, and traditional cleaners will make you scrub and scrub, until you’re worn out, frustrated, and even dirtier than the shower.

Grime and body oils will also collect on your shower doors, leaving behind a slick, yellowish or brownish film. Their greasy nature can make these stains difficult for some cleaners to remove.

Traditional shower cleaners require you to scrub your shower frequently to get rid of ugly shower stains and prevent buildup. The typical no-scrub shower spray, which is supposed to be more convenient, requires you to spray your shower every single day in order to get good results.

That’s not very convenient! And most shower cleaners, both traditional and no-scrub, use harsh chemicals such as bleach or ammonia that can damage some surfaces, and that leave behind a smelly, eye-stinging chemical cloud.

All of this makes you want to just close the bathroom door and pretend that the soap scum isn’t there. 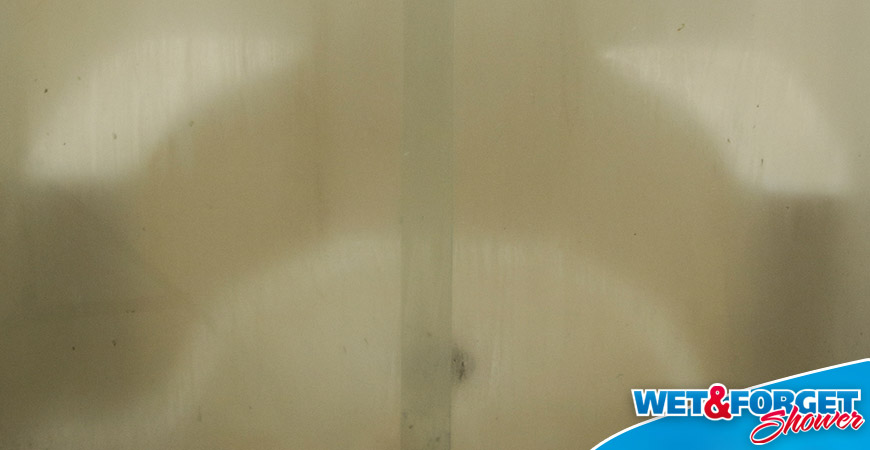 With Wet & Forget Shower, you can kiss scrubbing goodbye. That’s because Wet & Forget Shower’s unique dual-surfactant formula is specially designed to cut through soap scum, grime, body oils and mold and mildew stains with no elbow grease on your part.

The first surfactant breaks down soap scum and releases its grip on your shower doors, while the second surfactant dissolves body oils, leaving behind shower doors that sparkle and gleam.

Unlike other no-scrub shower sprays, you can get a clean shower and sparkling shower doors with just one simple weekly application. No more spraying your shower every day!

Our award-winning high-efficiency sprayer makes Wet & Forget Shower unbelievably easy to apply, and each bottle of Wet & Forget Shower contains 12 weeks of cleaning power, which means that it keeps your shower clean for less money than the typical daily shower spray. 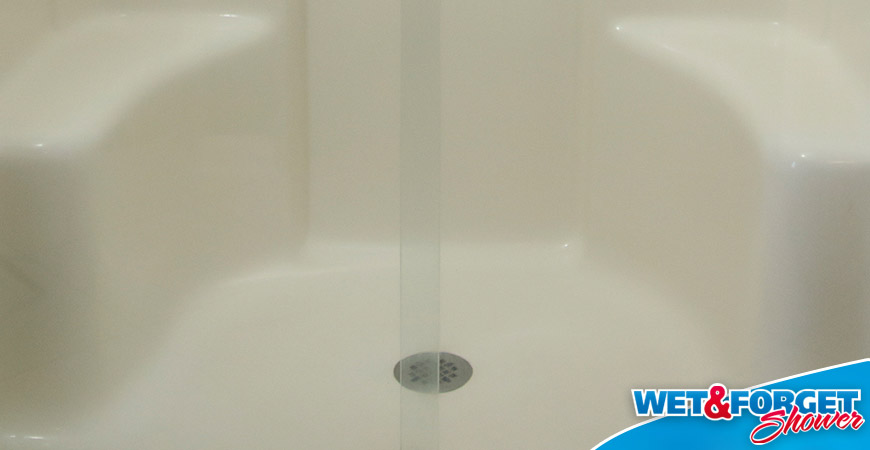 How to Apply Wet & Forget Shower

Not Just for Shower Doors…

Wet & Forget Shower also safely breaks down soap scum, grime, oils, and mold and mildew stains on your shower’s other surfaces, including:

*As with any shower cleaner, test Wet & Forget Shower on an inconspicuous area before using it for the first time. Do not use Wet & Forget shower on natural marble.