Hosta Care: How to Grow Hostas for a Beautiful Shade Garden

Hosta plants are popular for their lush foliage, the numerous varieties available, and their ability to thrive in the shade. Here we cover hosta care, hosta varieties, and transplanting hostas in the garden.

The hosta, sometimes called plantain lily, is an herbaceous perennial. There are numerous varieties of hostas to choose from with foliage colors ranging from deep blue-green to creamy white.

Wide selections of variegated and patterned leaf forms are also available. Moreover, depending on the variety, a mature hosta can range in width from 6 inches to 6 feet. 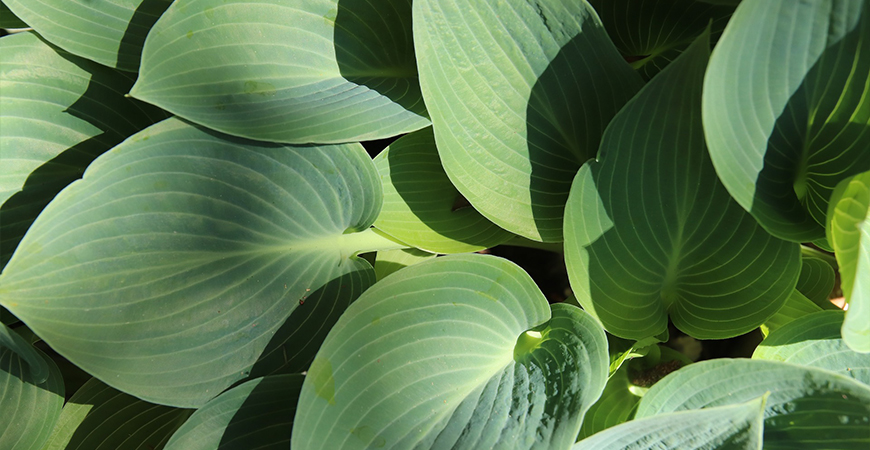 Hostas can vary in size, however, the August moon variation can grow to be 42 inches wide.

The foliage of August moon turns yellow when exposed to sunlight, hence its name. Correspondingly, this variety emerges early in spring and grows in an asymmetrical mound.

Additionally, August moon is a sizeable hosta growing to approximately 32 inches in height and 36 to 42 inches in width. 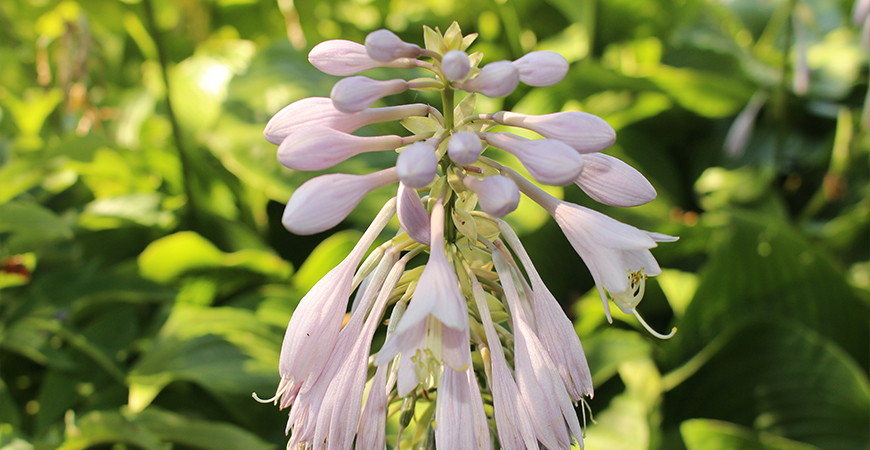 Distinguishable by its pale purple flowers, the aureo marginata, is one that’s sure to grab your attention.

If you’re looking for a showy hosta for use as a specimen plant, this expansive plant is a perfect choice.

Moreover, this early hosta grows in a large, vase-shaped mound facing outward from the center to provide stunning garden views. Not to mention its deep-green oval foliage with a bright gold edge describes aureo marginata.

Its pale lavender flowers appear on long scapes in mid-summer and grow to approximately 27 inches in height and 68 inches in width. 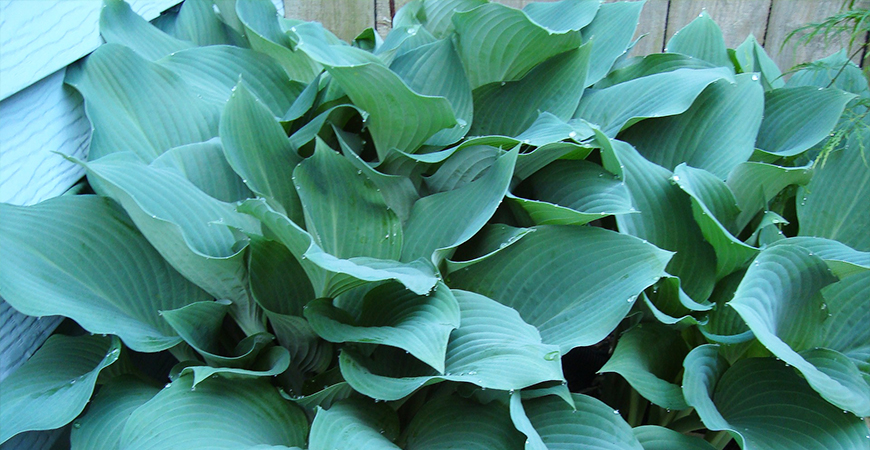 This variant is known for its blue-tinted foliage thus earning itself the name blue angel.

Known by its textured, blue-green foliage, a blue angel is one of the largest hostas. Blue angel tolerates dry soil and the morning sunlight in the mid to upper part of the US.

They can be identified by their lavender, funnel-shaped flowers bloom in summer. Equally important are the leaves as they emerge as blue and gradually turn green as the season progresses giving it its name.

For lasting blue color, plant blue angel in the shade. Furthermore, this variation grows to approximately 32 inches in height and 70 inches in width. 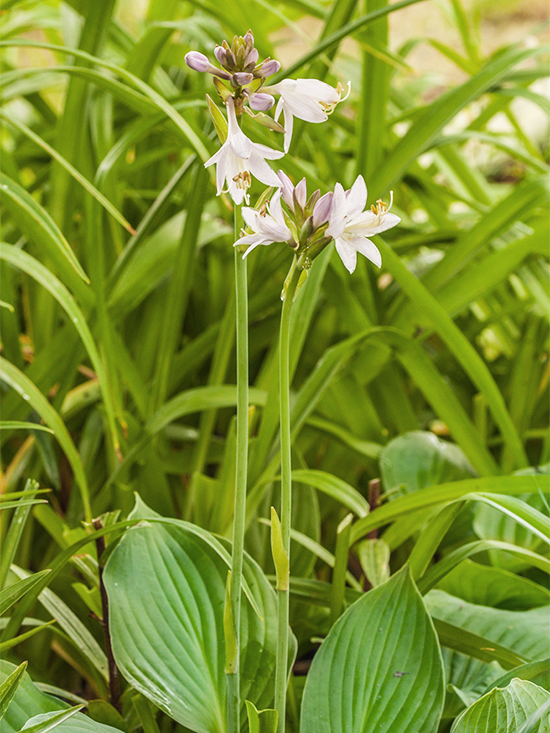 Although not as large as other varieties of hostas, blue cadets make for a great border plant.

Blue cadet is a smaller hosta prized for its blue, heart-shaped foliage. However, the leaves will gradually turn green in summer and fade to yellow in the fall.

This type of hosta bloom in mid-summer into mauve-blue flowers. This plant is the perfect plant to grow near your entry points since it adds a nice flare to your yard.

Blue cadet grows to approximately 15 inches in height and 38 inches in width making it perfect for use as a border plant. 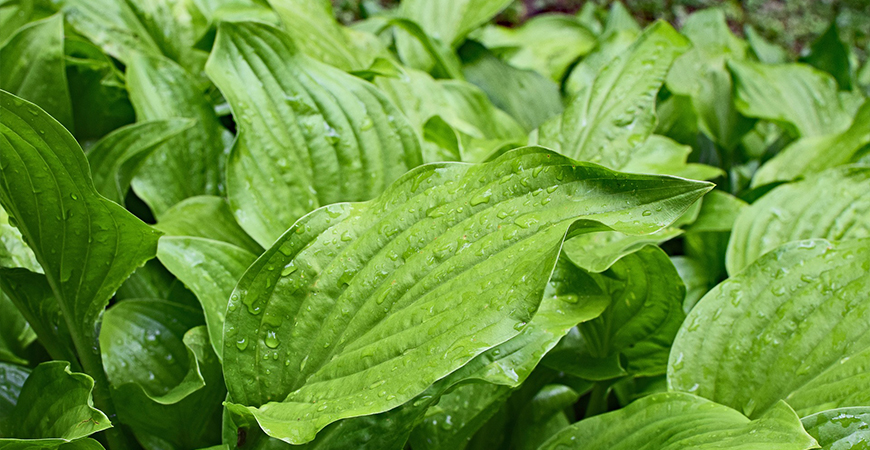 Gracillima hosta adds depth to your garden because of its funnel-shaped flowers.

Gracillima’s small size and deep green leaves make for a welcoming addition to a miniature or container garden.

Native to the Japanese island of Shikoku, the leaves of this dwarf hosta are long with a rippled edge. Additionally, its funnel-shaped flowers in lavender-blue with dark lavender stripes tend to bloom in late summer.

Gracillima grows to approximately 5 inches in height and 12 inches in width thus making them a perfect addition to smaller gardens.

Plant Gracillima away from cold, breezy locations since they prefer warmer locations. 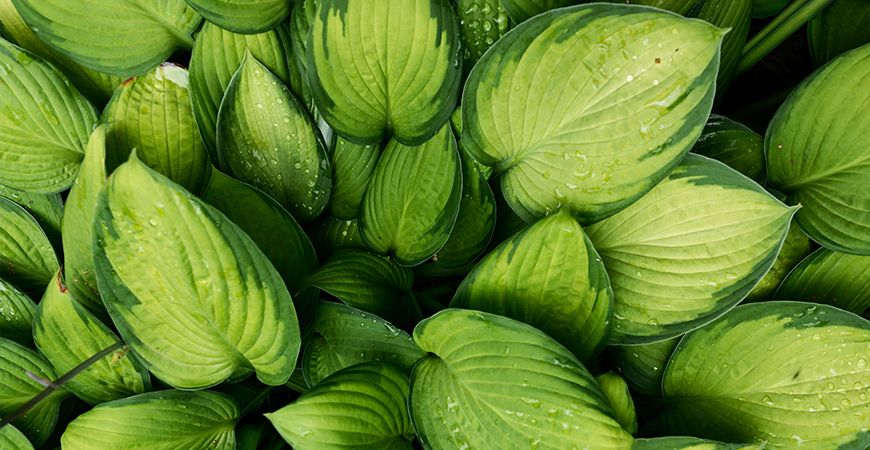 This highly fragrant plant, guacamole, is perfect for growing in containers around your home.

The guacamole hosta is popular for its exceptional bright green and gold streaked foliage and its lush growing habit. Not to mention its fragrant white flowers highlight the oval-shaped leaves in mid-summer.

Although the guacamole hosta is sun-tolerant, plant them in a bright, indirect light area because it will allow for the best leaf color.

They can grow to approximately 24 inches in height and 54 inches in width. Thus making them perfect for shade gardens and for growing in containers. 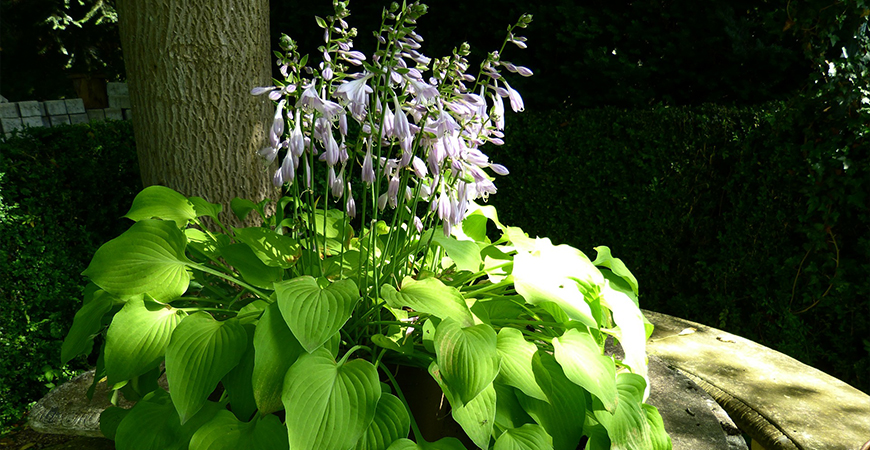 Fortunei hyacinthina is the best of both worlds when it comes to gardeners wanting both flowers and a hosta plant.

If you’re looking for a hosta with lots of flowers, then fortunei hyacinthia is an excellent choice because of the abundance of flowers that it produces.

It can be identified by its foliage- emerging as blue-green and then changing to gray-green as the season progresses. Furthermore, the leaves are textured and slightly cupped in appearance.

Another characteristic of this plant is the long stems that produce numerous amounts of lavender colored flowers in mid to late summer.

Fortunei hyacinthina grows to approximately 24 inches in height and 55 inches in width. This species is sun-tolerant and sturdy, thus making it a great addition to a perennial garden. 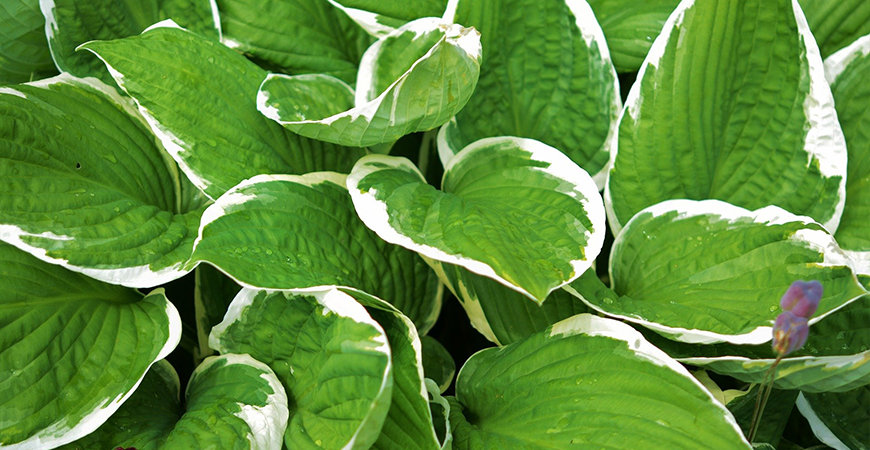 This variation of hosta, named honey pie, earns its name due to the sweet smell that it gives off.

This sun-loving, sweetly scented plant is perfect to grow in a container planter.

It’s identifiable by its green-gold foliage that is thick and textured. When the sun hits this plant, it encourages honey pie’s attractive yellow color to be more visible.

When it comes to their size, they grow to be approximately 18 inches tall and 38 inches wide. Another thing to consider is that honey pie thrives in part sun.

This variety looks attractive all summer – even in the heat of the South. 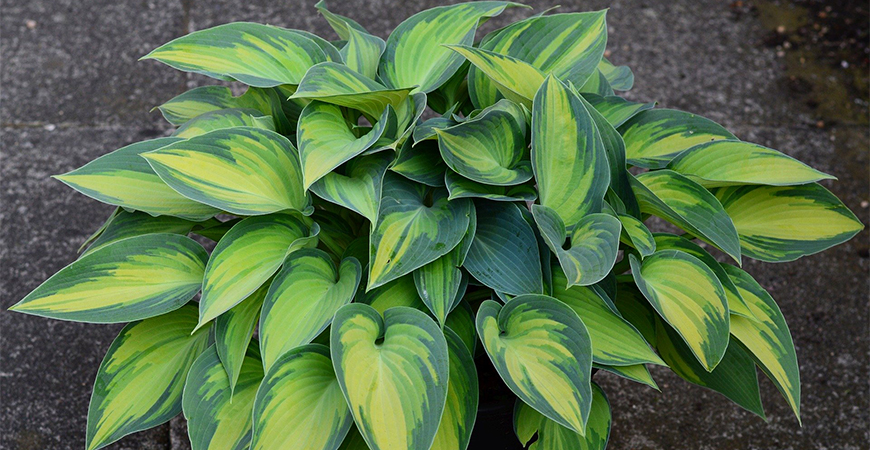 June hosta is known for its pale lavender flowers that bloom in the middle of summer as well as its hardy, tri-colored foliage.

This hardy and long-lasting hosta will look attractive in the garden until the first frost.

You can identify them by the tri-colored foliage with the gold, green, and blue-green margins. In addition, pale lavender flowers will bloom in the middle of summer.

June hostas thrive in full or part-shade and make a great addition to a shade garden. Keep them out of full sun areas because the leaves can burn.

However, when planted in full shade, the leaf corners will turn a shade of lime green.

June grows to approximately 16 inches in height and 37 inches in width making them good plants to fill empty spots in your garden. 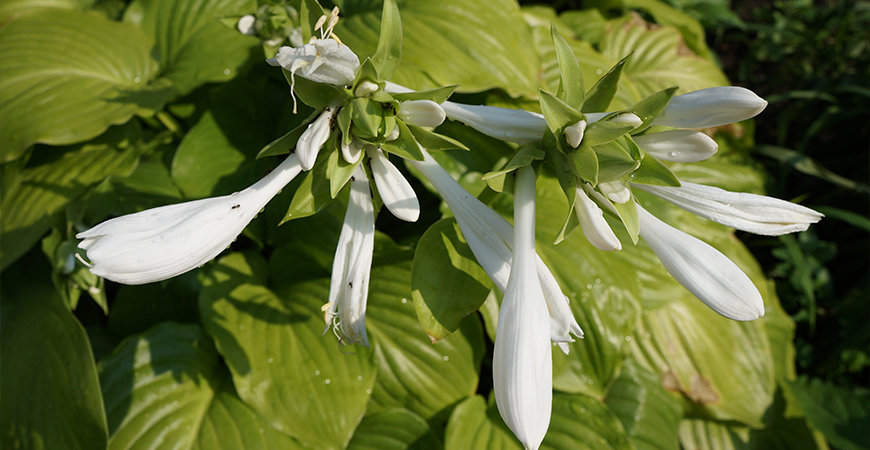 If you’re looking to clump hostas, be sure to plant royal standards because they thrive when planted in groups.

The royal standard is one of the few varieties with no contrasting margins and tends to thrive in northern U.S. climates. This plant is perfect for mass planting because they look best when planted in groups.

A few ways to identify this flower is by its wavy, yet shiny green foliage and the pure white flowers that appear during late summer.

Royal standard grows to approximately 26 inches in height and 63 inches in width. So give them plenty of space to sprawl out.

Plant royal standard in flower beds or next to your front door to enjoy the fragrant blooms. 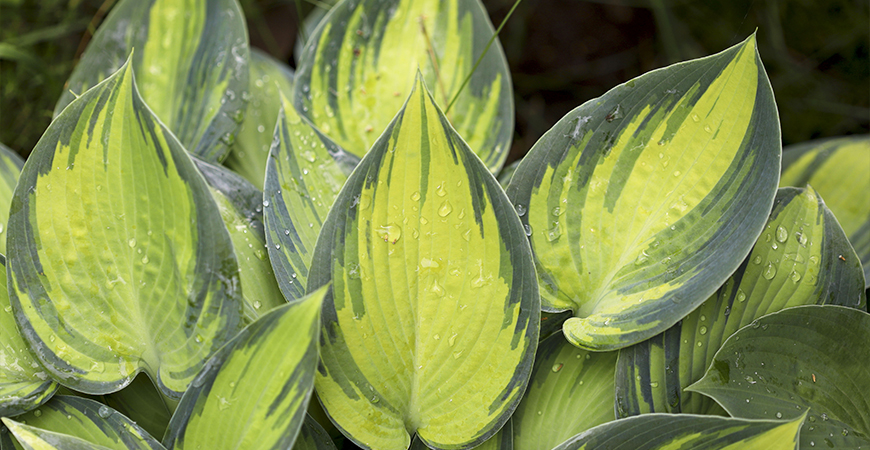 Be on the lookout for lavender-colored flowers that bloom mid to late summer from the whirlwind hosta.

The foliage of whirlwind changes colors as the growing season progresses. At first, the leaf center is white but gradually turns lime green to a medium green by mid-summer.

This prized variety is known for its variegated coloring and thick foliage. Additionally, the lavender, funnel-shaped blooms appear from mid to late summer.

Whirlwind grows to approximately 18 inches in height and 35 inches in width.

What type of hosta is best to grow near a patio or porch?

Choose a hosta variety known for its fragrant blooms so you can enjoy the scent it as you come and go. Fragrant varieties include:

What varieties of hosta grow best in my US plant zone?

Hostas prefer cold winters and warm summers. They require a cold dormant period of approximately 30 days, with a consistent temperature below 43 degrees F. 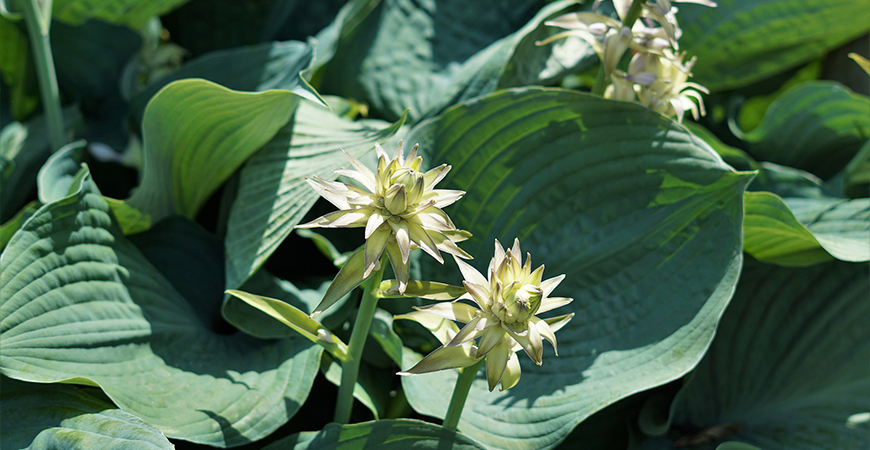 There are many varieties of hosta. The one shown above is a sieboldiana variation.

Do hostas prefer the shade, part-shade, or sun?

It depends on the variety. In general, hostas thrive with limited morning sun and afternoon shade.

What type of soil is best for hostas?

How often should I water hostas?

Water hostas with one-inch of water per week during the growing season. By watering deeply, it encourages vigorous root growth.

Try to water newly planted hostas every few days until they take root and start to grow.

Hostas are easy to divide and transplant, making them a budget-friendly solution for home gardeners.

According to GardeningKnowHow, spring is the best time to transplant hostas because rainfall can be expected. When you do transplant them, make sure they have plenty of space in their new home to spread their roots.

Did you know? Hosta flowers are a favorite of bees, hummingbirds, and many beneficial insects.