Summer has arrived, and in many parts of the country that means cranking up the AC and paying much higher power bills each month.

Here are five easy ways to keep your home cooler this summer without busting your budget, courtesy of DIY guru Danny Lipford from Today’s Homeowner.

Replacing standard incandescent light bulbs with energy efficient CFL or LED bulbs not only lowers your power bill, but it keeps your house cooler as well. That’s because CFL and LED bulbs produce much less heat than standard bulbs while providing the same amount of light.

LED bulbs cost more than CFLs, but they last up to five times longer and do an even better job of lowering your power bill. LED bulbs also create much less heat than either CFLs or incandescents.

For a warm glow similar to that of incandescent bulbs, look for CFL or LED bulbs in the 2700K to 3000K temperature range. To give a whiter light, choose bulbs ranging from 3100K to 4000K.

To keep your house cooler in the summer, it’s important to reduce the amount of solar heat coming into your home through windows. The best way to do this is by replacing old single pane windows with insulated glass windows that have a low-E coating.

A less expensive way to reduce solar heat gain is by installing heat blocking solar film on the inside of single pane glass windows. Don’t install solar film on double pane windows as it can cause heat to build up between the glass which can rupture the seal and void the glass warranty.

Other options for reducing solar heat gain include closing curtains, shutters, or blinds during the day on sunny windows; and installing awnings or planting shade trees on the south and west sides of your house.

Cool Tip #3: Cool Down with Fans

Though it may seem old school, fans are a great way to keep you cool, and they can reduce your power bill as well, if you turn the air conditioner thermostat up when using them.

Set ceiling fans to rotate counterclockwise when looking up at them, so they blow cool air down on you. Fans don’t actually cool the air—just your skin—and they only work when you’re in the room to enjoy the benefits, so be sure to turn them off when you’re not in the room. 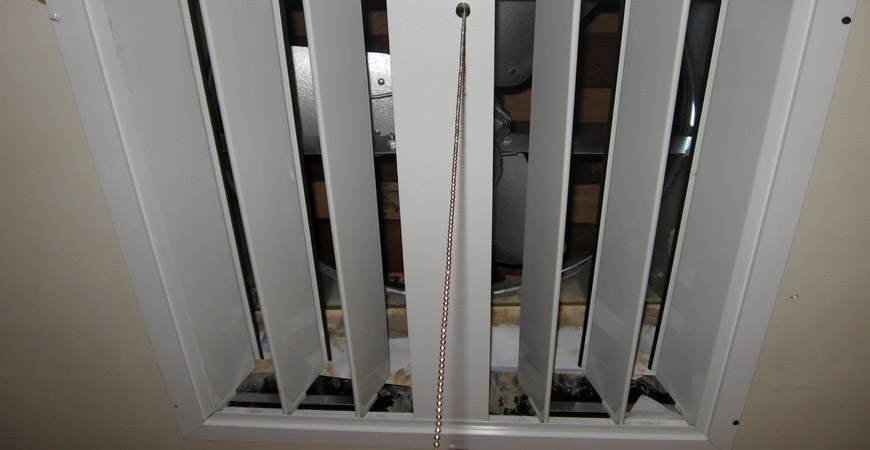 Cool Tip #4: Cut Back on Cooking

Running an oven or cooking on the stove for long periods of time adds both heat and moisture to your home. To keep your house cooler during hot summer weather, consider cooking in the microwave, preparing cold meals, or grilling outside instead.

When you do cook, cover pots to reduce moisture and run the vent fan on range hoods or microwaves. Make sure the fan is vented to the outside so it will remove the excess heat and moisture from your home.

Running a bathroom vent fan during and for 20 minutes after showering is also a great way to remove heat and moisture from the air to keep your air conditioner from working as hard.

Another important way to save energy and reduce the heat in your home is to make sure to turn lights off when you’re not in a room. If you’re the forgetful type, consider installing motion activated sensors that turn lights on when you enter a room and off after you leave.

Computers, TVs, and other electronic devices generate heat and use power when running, so turn them off when not in use and set computers to sleep mode. Many electronic devices use energy even when off, so consider plugging them into a power strip, and then turn the strip off when they’re not being used.

Taking the time to follow these simple tips can go a long way toward making your house cooler and lowering your energy bill this summer.

Keep cool, and enjoy your summer!