Fans of the Month: Gilbert and Carol Defeated Lichen and Black Algae! 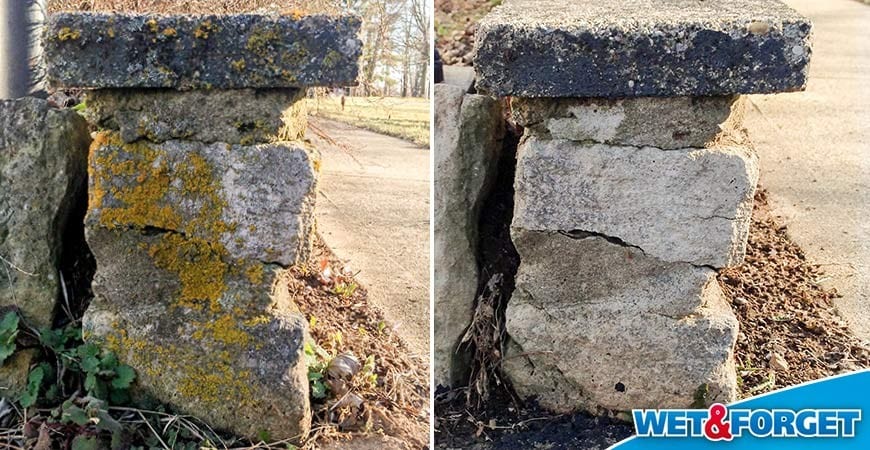 Gilbert and Carol S. were sick and tired of the black algae that made their sidewalks look like someone had rubbed them with soot. “It was so ugly and embarrassing, and we had to do something about it,” Carol says.

Gilbert and Carol weren’t sure what to do about the algae until they used Wet & Forget Outdoor to eliminate green algae on their vinyl siding, and were thrilled with the results.

“We decided to try it on the sidewalk, and WOW!” Carol says. Wet & Forget Outdoor also wiped out lichen on their rock wall with zero work on their part.

Read on to hear their story, and to see more amazing before and after photos!

Gilbert and Carol bought their 1950s-era home not quite 20 years ago. Along with perks like a larger garden and a fireplace came a problem: black algae on their front sidewalk

“It wasn’t the original sidewalk, but I know it had been there for decades. The algae probably had been, too,” Carol says.

Gilbert and Carol set about redecorating indoors and making the home their own, but they weren’t sure what to do about the black algae that stained their concrete. “I heard that pressure washing can mess things up, so I didn’t want that,” Gilbert says.

Bleach or scrubbing didn’t sound like a great idea to Gilbert or Carol either, so they did what so many of us do: they just let it go and tried not to look at it.

The black algae continued to thicken over the years, making the sidewalk look like someone had rubbed it with soot.

Then, things got worse: after Gilbert and Carol installed a hot tub in the late 90s, the black algae started colonizing the sidewalk that they installed leading up to the hot tub (see photo below). “We’d had enough,” Carol says, “we were ready to wipe it out!” 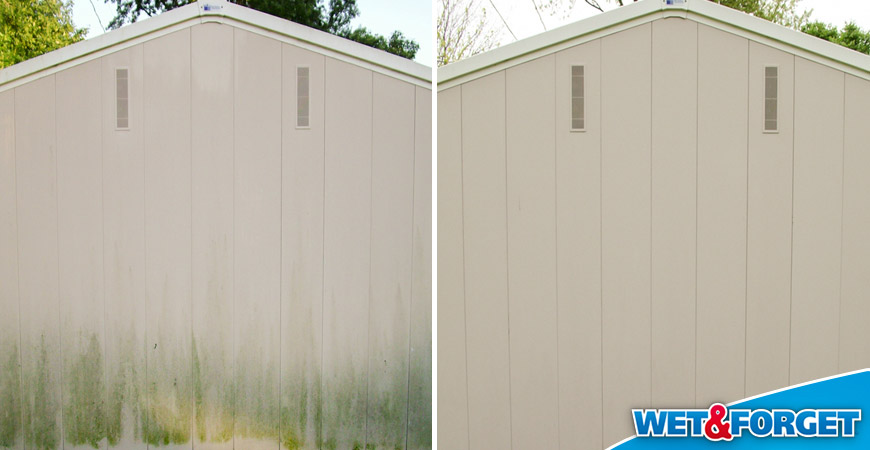 It looks like a new sidewalk!
–Carol S., Dayton, OH

Once Gilbert and Carol decided to take action, the rest was easy. They simply grabbed the Wet & Forget Outdoor that they still had left over from cleaning their siding, diluted it according to the instructions, and sprayed the concrete.

“I was done in just a few minutes,” Gilbert says. He noticed some lichen on the rock wall by the front sidewalk, and decided to spray that, too.

Then life happened: Gilbert and Carol got busy with other things, and forgot about the concrete. They didn’t see their sidewalks very often during the snowy winter. Then the snow melted, and they were just blown away when they saw their sidewalks.

“It looks like a new sidewalk!” Carol exclaims. “We just can’t believe it.”

Gilbert was just as surprised. “I can’t believe I was just doing other things, while Wet & Forget was cleaning up.”

“I can’t believe I was just doing other things, while Wet & Forget was cleaning up.”
–Gilbert S., Dayton, OH

The lichen on Gilbert and Carol’s rock wall was no match for Wet & Forget Outdoor Cleaner, either (see photos above and below). Gilbert treated it with Wet & Forget, and it just disappeared! “It was just gone,” he says, “I wish the yard work could be this easy!”

“I wish the yard work could be this easy!”
–Gilbert S., Dayton, Ohio